Jeff Floyd - Singing From The Heart With Soul

Do you know what it feels like to meet someone you’ve listened to, have sung along with, watched his videos, bought his CDs, and have loved for a mighty long time?  That’s how I felt when I met the legendary Jeff Floyd.  What a feeling!!  I even have some of his earlier CDs on my very old iPod and often listen to his music when I’m traveling or relaxing at home.  It was a joy to see him perform and an honor to talk with him. 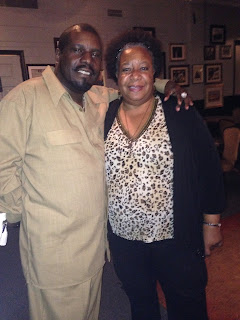 I got a chance to sit down with Jeff Floyd after the recent Heavy Hitters of Soul Show in Pomonkey, Maryland, and he is just as amazing as his music.  Jeff is from Jacksonville, Florida, and is very passionate about southern soul music.  He says that he’s trying to keep the music alive.  Jeff blends in the sounds of many original R&B/blues artists and his goal is to keep the music going.  He says that we will lose the music if we don’t keep performing it and recording those sounds.

We had a discussion about the music and artists of today.  As we all know, southern soul artists get paid a whole lot less than their counterparts and I personally think that they work a lot harder.  They have a hard time getting major record labels to push their music and so artists usually have to touch base with dee jays throughout the country.  They will develop a rapport with them, maintain a good relationship and network as often as they can, and hope that the radio station will play their music.  They find that when one station plays their song and realize how much people like it; they’ll keep playing it.  When a record is popular on one station, another station will usually pick it up and the cycle keeps going.

Jeff says that his music is all about singing from the heart with soul.  He is one of the performers that’s trying to keep the old sound alive and brings an old spirit and old flavor to his music.  I love his music and you can hear his work if you turn on the radio and listen to any southern soul station anywhere.  He’s a true legend.

Here is a list of the songs he sang that night:
How You Want It
I Got My Woman Upset
Lock My Door
Try A Little Tenderness
It’s You (a very beautiful ballad)
You Had It All
Shake Something Loose
Somebody’s Gonna Lose A Good Woman
Love on a Lonely Highway

Here are just a couple of my favorite Jeff Floyd songs.  There are so, so many more.


Don't forget to connect with Jeff Floyd on his Facebook page.

Jeff Floyd's a remarkable performer who sings from the heart with soul and is keeping the music alive.  See his show as soon as you can!
XXOOXX
Southern Soul Paradise
southernsoulparadise@hotmail.com
Posted by Skyy at 2:43 PM