If you take a look at the right-hand corner of my blog, you probably already know that I love J. Red and his music!!!!  So, I was excited to see him Saturday night.  He was joined on stage by his wife, Sham, and Shay Denise and the Rise Band & Show played the music. Wonderful!!!  You can tell professional performers when you're around them because they have that star quality.  That's what I see in J. Red.  He engages the audience and the crowd loves him.  He and his wife even helped us with learning the steps to his line dance song, Step Out.  It was a lot of fun and a great show!

J. Red also has an album coming out soon - I can't wait!

Some of the songs he performed were:
Hole In The Wall
Give It To Me
I Will
Loving On You
Drop That Thang
Step Out
Good Thang 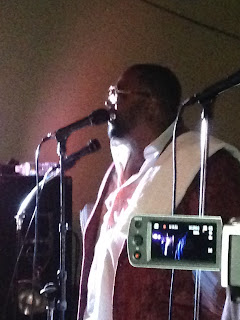 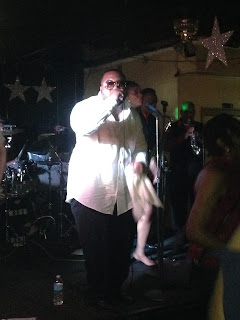 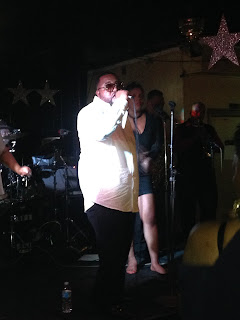 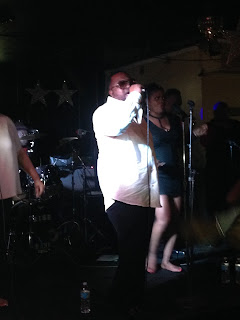 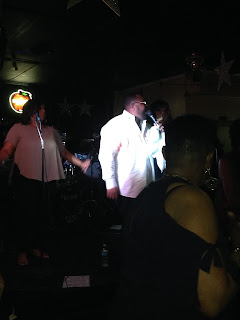 This is part 3 of my series from Saturday night at the Lamont's Entertainment Complex in Pomonkey.  The Rise Band & Show performed and this was my first time watching them in concert.  I was pleasantly surprised and thoroughly enjoyed them.  They are definitely entertainers and I love the band!!

I'm pretty old school and, in my opinion, a band isn't a real band unless it has horns.  The Rise Band & Show had everything I needed - saxophone, trumpet, guitars, drums, and an energetic lead singer. They were great and I hope to see them again!

Some of the songs they performed are as follows:
Soul Finger
Tighten Up
Be Thankful for What You Got (very pretty)
Slip Away
Bedroom Workout
Cha Cha Slide (a cool version)

These aren't the best pics but here goes: 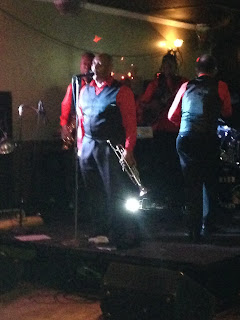 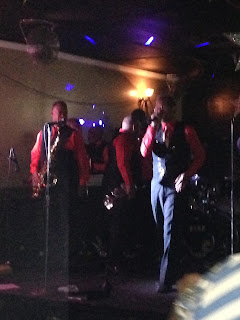 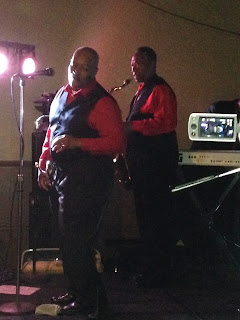 Shay Denise’s “Man’s World” has been in the Top 10 Countdown that’s conducted each weekend by Mobile, Alabama’s WDLT.  I met Shay last summer and she is a beautiful person who happens to also have a great voice.


Some of the songs that she sang are as follows:
Clean Up Woman
Chick on the Side
You Can Get It (may be her next single)
The Weekend
A Man’s World


Her album is coming out on April 1 – check your favorite cd sites for it! 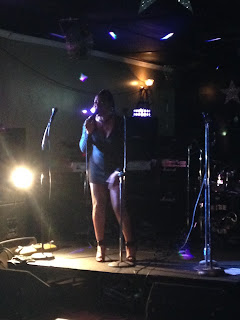 Posted by Skyy at 9:31 PM No comments: Links to this post

While at the Lamont's Entertainment Complex in Pomonkey, I had the pleasure of interviewing Miss Mini (not Minnie) and I LOVE her!  She is friendly and has a beautiful girl-next-door type of personality which makes it easy to talk to her.   She’s the type of person you could call a friend.  It was a joy to talk with her and to listen to her sing.  She started the show with her cover of “Rocking Chair.”  She sang an absolutely beautiful duet with J. Red, the Nephew, and also performed her southern soul hit, “That ActRight!”

Miss Mini, whose real name is Catrese West (isn’t that pretty), is from Sharpsburg, North Carolina, which is located near Rocky Mount.  Both of her parents were singers and she started to sing with her father’s band when she was about 15 years old.  She said that she’s really been singing all of her life and her mother used to take her around to different places to have her perform.  I used to play a clarinet and her story reminded me of the time when my mom would have me perform everywhere – whether I wanted to or not! Lol  I guess the saying is true - if it won’t kill you, it’ll make you grow stronger. Lol

I asked her who were the people who influenced her musical career.  Miss Mini said that her grandfather ran a juke joint called The Crossroads and she would go there and listen a wide variety of the blues.  It was there where she would hear Johnnie Taylor, Tyrone Davis, Peggy Scott Adams, and so many more artists.  She fell in love with the music and was inspired to use her voice.

Future plans?  Miss Mini loves to sing and plans to continue to sing and work as much as she can.  Her goal is to focus on her music and allow it to develop into all she knows it can be.  She's not just a singer, Miss Mini is an artist who writes most of her music.  She has been traveling throughout South Carolina, North Carolina, Virginia and Maryland, and plans to broaden her scope of experiences and performances throughout the rest of the world.

I'm looking forward to many more years of watching Miss Mini perform and listening to her music.  She has a new album coming out in June – be on the lookout for it! 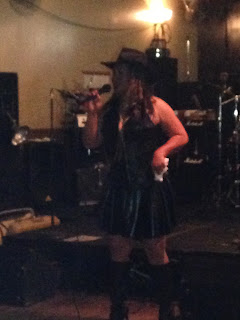 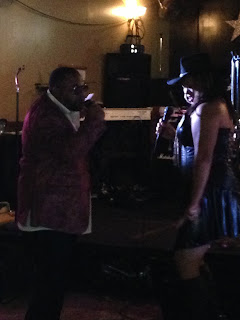 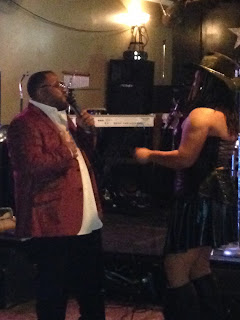 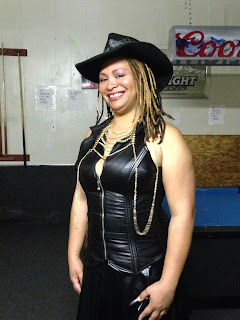 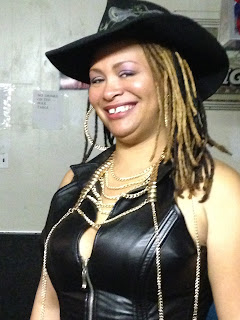 Posted by Skyy at 7:52 PM No comments: Links to this post

Dr. Nick at Lamont's in Pomonkey 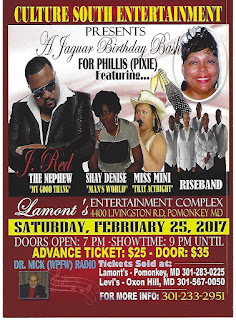 I missed WDLT's Top 10 Countdown this past Saturday because I was partying with J. Red, Shay Denise, Miss Mini, and the Rise Band & Show at Lamont's in Pomonkey, Maryland!  What an awesome time!!! It was great. The show was in celebration of the birthday of Phillis, aka Pixie, who is a concert promoter in the area. She has been responsible for bringing several southern soul acts to the DMV and I'll feature each one in a four-part series. 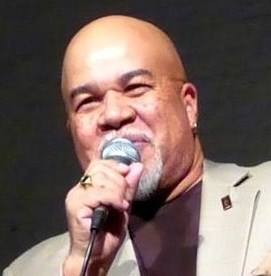 Whenever there's any kind of show, whether it's comedy, music, awards, whatever, it ALWAYS takes a special person to pull it all together and set the tone of the show.  For this event, it was none other than the amazing Dr. Nick who served as the MC and made this fabulous show a success.  If you've attended an event with Dr. Nick or have listened to him (or watch him on Facebook Live) from 2-4pm each Saturday afternoon on WPFW, you already know the type of man he is.  He's a dynamic entertainer (yes, he is an entertainer) and he made sure we had a great time Saturday night.  He knows his crowd, knew what we wanted to hear, and played fantastic music in between acts.  He got everyone on the dance floor.  It was a fun night!

Posted by Skyy at 7:43 PM No comments: Links to this post

Chris Ardoin - "Til the Sunrise"

To learn a little about Chris Ardoin, here's his bio according to Wikipedia and ReverbNation:

Wikipedia:  Chris Ardoin (born April 7, 1981 in Lake Charles, Louisiana) is a zydecoaccordionist and singer. He is one of the young artists that helped form nouveau zydeco, a new style of music that fused traditional zydeco with various styles including hip-hop, reggae and R.&B.

ReverbNation:  Internationally known for his soulful vocals and music composition, Chris Ardoin is one of the most sought after artists / producers in the industry today! He has traveled and performed in all 50 states as well as overseas in London, Japan, Sweden, Amsterdam, Brazil, Australia, Germany, Jamaica, Mexico, Paris, and Cayman Islands. Chris has also appeared in stage plays and movies, most notably "Tempted" with Burt Reynolds and Saffron Burrows which frequently airs on Cinemax and Lifetime Movie Network. Breaking attendance records from Louisiana nightclubs to Carnegie Hall in New York City to Carnivale in South America...Chris is bringing zydeco music, creole culture, & southern soul music to new heights beyond expectations, Chris Ardoin is destined to be one the greatest of all time!!!!!

I've loved Toia Jones since way before she was a contestant on The Voice - I still don't think they treated her right. lol  Here's her latest hit with Bigg Robb; it's played a lot in south central Alabama!!

When I first heard this song - and wasn't listening to the words - I thought oh wow, what a sad song to sing.  It even starts out with dearly beloved, we are gathered here...  But then I heard it again and listened to the words and well, I just don't know what to say so I'll leave it alone. lol Bigg Robb sings about a problem that evidently faces most men sooner or later.

I love this medley of songs: God Blessed Our Love, When A Man Loves A Woman, and That's How Strong My Love Is.  I've written a post about this before (see http://southernsoulparadise.blogspot.com/2011/01/ov-wright-live-in-japan.html) and it is still one of my favorite go-to songs when I'm traveling - especially flying.  It's great because the song lasts almost 13 minutes and it makes my flight time that much better!!  That's the truth! 😊

I know it's long but I hope you enjoy this beautiful song!

XXOOXX
Southern Soul Paradise
southernsoulparadise@hotmail.com
Facebook: SouthernSoul Paradie
Posted by Skyy at 11:01 AM No comments: Links to this post

It's Saturday night and time for Cathe's Countdown!  Here are 6 of the top 10* most requested southern soul music hits of this week from WDLT FM, the greatest station in the Mobile, Alabama, area.  They have an awesome "All Blues Saturday" show with amazing on-air personalities: Nikki deMarks, Stormy, and Cathe B. The countdown comes on at 7:00 p.m. CST (8:00 p.m. EST) each Saturday night.

To  to the station if you're in the Mobile area, turn your radio to 104.1 FM and if you're online, go to www.1041wdlt.com. You can also  via iHeart Radio on your phone/tablet.

I love southern soul music! Thank you Cathe B for a wonderful countdown and WDLT for a  All Blues Saturday!!
XXOOXX
Southern Soul Paradise
southernsoulparadise@hotmail.com
Facebook: SouthernSoul Paradise

Posted by Skyy at 10:24 PM No comments: Links to this post