I posted this song a couple of years ago but thought I'd put it out there again.  I heard it the other day and can't seem to get it out of my head. lol  Take a look at: http://southernsoulparadise.blogspot.com/2012/03/karen-wolfe-stuttering.html - I included lyrics.

Love it!
XXOOXX
Southern Soul Paradise
southernsoulparadise@hotmail.com
Posted by Skyy at 8:39 PM Links to this post

most requested  soul  hits of this week from WDLT FM, the greatest station in the Mobile, Alabama, .  They have an  "All Blues Saturday" show with amazing on-air personalities:  deMarks, Stormy, and Cathe B. The countdown comes on at 8:00 p.m. CST (9:00 p.m. EST) each Saturday night.
I was passing through the Mobile area today and was sooooo happy to hear the "All Blues Saturday" show on my car's radio!! Even though I always listen online, it was still a thrill to turn on the radio and hear it live and in real time!!

I like the instrumental intro.  Ladies, we get involved with these married men all the time and we set ourselves up for heartache. Like Adrena says, he won't leave his wife for you.  Of course, the man says there's no love at home and he and his wife fuss and fight all the time.  So, you wait around till his kids are grown and he's no longer paying child support, all the time thinking that this is the time he's going to belong to you...and the man still stays with her.  You keep hoping he'll be yours but you keep lying to yourself. Look at the number of years you've wasted - waiting and hoping one day that you'll be number one.

He almost always never leaves his wife.  If you're in a relationship with a married man, stop for a moment and take Adrena's song to heart.

Ladies, listen to the message!
XXOOXX
Southern Soul Paradise
southernsoulparadise@hotmail.com
Posted by Skyy at 8:29 PM Links to this post

Mel Waiters - "Being a Fool for You"

What a beautiful ballad by the late, great Mel Waiters.  He left us with some wonderful music. He said it is real hard being a fool for someone who doesn't even love you - he's getting used to being a fool for his girl.  Poor thing, no man should be treated like that. lol

I had the pleasure of attending Dr. Nick's 1st Annual Southern Soul Festival at Lamont's Entertainment Complex down in Pomonkey, Maryland!  Yes, a place called Pomonkey actually does exist. It kind of reminds me of The Playground near Possum Bend in Camden, Alabama, and that made it even better - it truly felt like a southern soul festival.  It is the kind of place where you bring your own lawn chair, roll out your cooler, and sit back and enjoy the party. The crowd was laid back and the sole purpose of everyone there was to have a good time.  The music was fantastic, the weather was beautiful, and the day was great; we had a ball.  Thank you Dr. Nick for this event and I am so looking forward to next year! 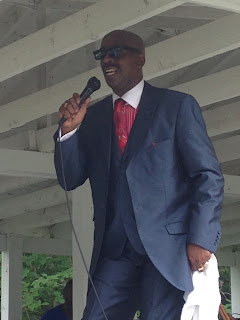 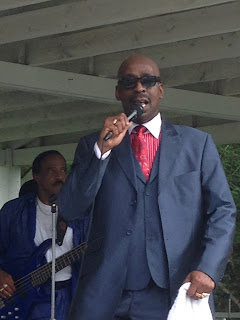 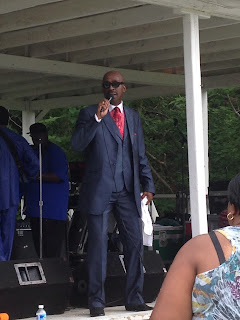 SHAY DENISE
Shay Denise is a new r&b singer recently presented by the Soul Mop Music Group.  She sang several songs including her latest, Man's World, along with Clean Up Woman, No Chick On The Side, and the line dance - Move.  I had a chance to speak to this lovely lady and found out a few things about her.  Shay is originally from Palm Springs and currently lives in Atlanta.  She has four children and one grandchild - you wouldn't know by looking at her!  She is a fun person, is outgoing, and loves to sing.  Shay's been singing since she was a little girl and you can tell that she loves what she does. She said that the type of music she sings is feel good, catchy music and that she sings a lot of material about the things women go through. She has a beautiful spirit and I'm looking forward to hearing her voice and her music for a long time to come. 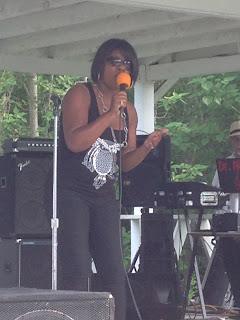 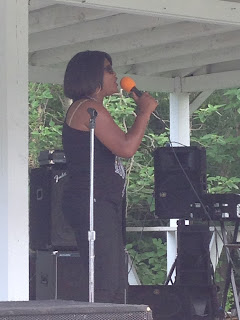 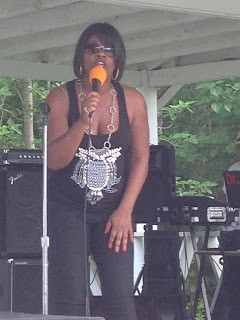 
HARDWAY CONNECTION
Hardway Connection is a crowd favorite and the southern Maryland fans love them. They have also won plenty of awards for their music. I always love watching them perform; they put on a classy act and have a great deal of talent.  In addition to singing happy birthday to someone in the crowd named Rodney (he cooks seafood in the area), here are some of the songs they sang:
Twerk That Thing
I'll Take You There
Somebody
The Choking Kind
Leaving on the Morning Train 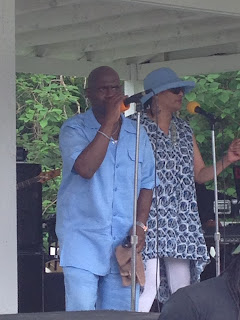 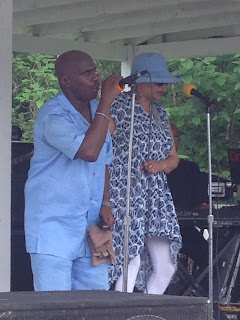 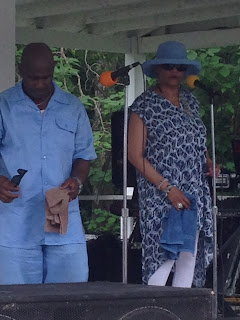 Here is one of my favorite Hardway songs - "It Must Be Love."


JESI TERRELL
Jesi is a rising star and is popular in the DC area.  She is very talented and her lineup included Trapped By This Thing Called Love, Sleep with One Eye Open, Clean Up Woman, and her hit, Love Mechanic.  Here's a little info that I found on her from the Gigmasters' website:

The rising songstress, known to all as Jesi Terrell (Ms. Sweetheart of Soul) is a contemporary R & B Superstar. One cannot help but notice her voice. Jesi delivers a cutting edge, sultry sound, with sweetened around the edges.

Jesi has shared the stage in concerts with some of the top names in the music business to include artist such as; Bobby Blue Bland, BB King, Little Milton, Koko Taylor and more.

In 2009 Jesi Moved to Washington, DC where she formed her band, The Love Mechanic Band. The LMB is a high energy funky blues, soul band, which is consist of 7 members. 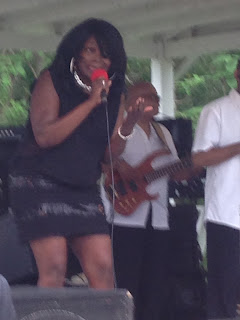 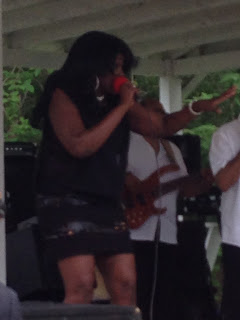 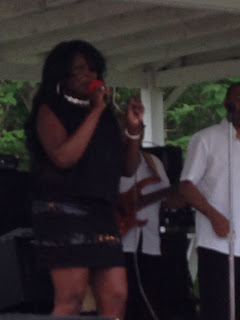 J RED, THE NEPHEW
The headliner for this great show was J. Red.  You can tell that he loves to perform and it shows in his personality!  He is personable and friendly and can sing on top of all that.  J Red loves the crowd and the crowd loves him.  He is definitely a great entertainer.  He opened up with Never Too Much and sang the following:
Hole In The Wall, Give It To Me
Just Keep On Dancing
I Will
Love On You,
Good Thang
Step Out - the line dance he helped us learn how to dance! 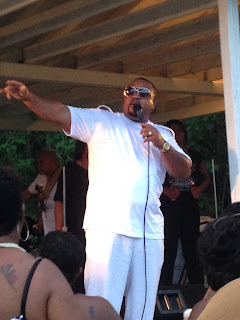 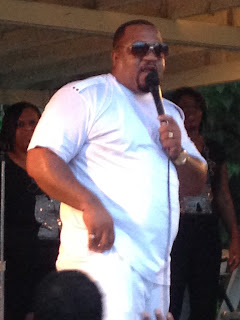 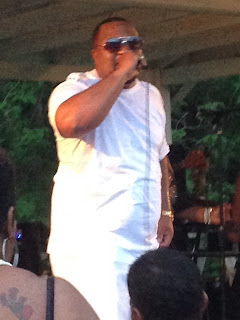 See my interview with J. Red, the Man Behind The Music:
http://southernsoulparadise.blogspot.com/2015/10/j-red-nephew-man-behind-music.html

And last but certainly not least, here's a picture of Dr. Nick.  He is truly a phenomenon in the DC area and is a hard, hard, hard working man.  Thank you Dr. Nick for keeping southern soul music alive in this area!!!  We love you!

There is no show like a southern soul show!
XXOOXX
Southern Soul Paradise
southernsoulparadise@hotmail.com


Posted by Skyy at 5:32 PM No comments: Links to this post

The Duchess Jureesa McBride - "Karma, She'll Take Care of You"

I absolutely adore this song.  I posted it a few months ago and reposting it again with the lyrics.  The Duchess Jureesa McBride's voice is awesome and the lyrics get to me every time.

This girl spent 13 long years of being the woman on the side - we all know about the sidepiece.  She would sit at home and cry during the holidays and she knew that it was a dangerous game sneaking around on his wife.  The day finally came when they got caught and the wife tells her that karma is a fool that wears high heeled shoes. And just when you think she's through, she'll take care of you. What a great message!

Congratulations to The Duchess who's currently performing in Europe!!!
XXOOXX
Southern Soul Paradise
southernsoulparadise@hotmail.com
Posted by Skyy at 2:41 PM No comments: Links to this post

Johnnie Taylor - "Running Out of Lies"

If you've been reading me for awhile, you know that I love Johnnie Taylor.  "Running Out of Lies" is probably at the top of my favorites list and although I've posted this before, it is definitely worth posting again!  What a classic - it is simply beautiful!!!!

You know Latimore from his legendary classic, "Let's Straighten It Out," and here is another one of his great songs.  "Sunshine Lady" is a very pretty ballad with beautiful music.  It's a love song in which Latimore tells of this girl who is so beautiful and is clearly the light of his life.

"Sunshine Lady" is taken from his 1986 album titled Every Way But Wrong.

You've got a smile so bright
At night you don’t need no light, Sunshine Lady
The radiance of your charm
Outshines the morning sun, Sunshine Lady
And on a cloudy day, you can chase the clouds away
With the sunshine in your love who needs the sun above
Sunshine Lady

The sparkle in your eye
Is brighter than the summer sky, Sunshine Lady
Your sunny personality
Is like a Caribbean breeze, Sunshine Lady
When you walk down the street
Flowers grow beneath your feet
And when you go out at night
You fill the neon lights, Sunshine Lady

Oh but when you walk down the street
Flowers grow beneath your feet
And when you go out at night
You fill the neon lights,Sunshine Lady

You've got a smile so bright
At night you don’t need no light, Sunshine Lady
Your sunny personality
Is like a Caribbean breeze, Sunshine Lady...
.
Enjoy!
XXOOXX
Southern Soul Paradise
southernsoulparadise@hotmail.com
Posted by Skyy at 7:11 PM No comments: Links to this post