Karen performed at the Southern Soul Music Festival in beautiful downtown Pomonkey, Maryland, and she was awesome!! 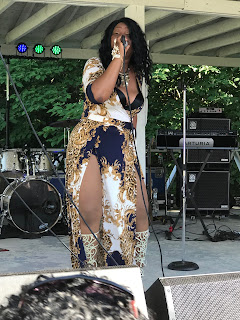 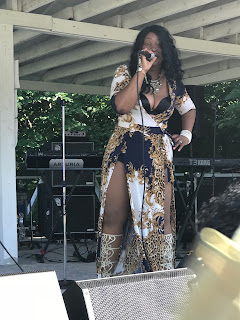 If you’re man enough to leave, you can best believe that I’m woman enough to let you go. Yes!!  That is our national anthem! Lol I love, love, love Karen Wolfe Bass!  In this song, like so much of her music, you know what she’s talking about because you’ve either experienced it or know someone who has.

She put on a great show and some of the hits she sang were:
Southern Soul Party Mood
Back Door Love Affair
Stuttering
That Bitch Ain’t Me

Because Karen Wolfe Bass is a huge celebrity, I admit that I was totally star struck before I talked to her but she is soooo nice! It was like talking to someone you’ve known for a long time.

Karen Wolfe Bass is originally from Pine Bluff, Arkansas, and now lives in Memphis, Tennessee.  She started singing as a little girl and grew up singing gospel music.  She had two gospel groups – Direction and Serenity.

Whether you’re a singer or not, there are usually performers or artists who have had an impact on your life. I asked Karen about some of the artists who encouraged and motivated her and she said definitely Denise LaSalle, Betty Wright, and Mavis Staples.  For those of you who don’t know, Karen was related to Denise LaSalle and not only spent a lot of time with her but sang with her as well.

I asked Karen about the direction she thought that southern soul music was going.  She said that people are sleeping on it now but they’re going to wake up soon!  I feel the same.  I believe southern soul is becoming more popular, mainly for two reasons. One, the internet is making it more accessible.  At one time, you could only hear the blues/southern soul when you went to the south and turned on your radio.  Now, you can hear southern soul anytime and anywhere you want.  I listen all day and night from my computer, phone, and Echo. And secondly, an increasing number of young artists are singing it.  It’s not a dying art – new artists are coming out all of the time and are keeping our music alive.

Karen said that she has a new single, “You Ain’t Woman Enough,” and she’s working on a Christmas CD with Sir Charles Jones.  I can’t wait to hear that collaboration but wouldn’t it be great if she recorded an entire Christmas CD??!!

Karen is a really down-to-earth person and says that she performs for her fans.  We keep her motivated.  She said that she loves us and will keep putting music out for us; she only asks that we keep supporting her.  Don’t worry Karen, we love you and will support you in everything you do!! 😊💕 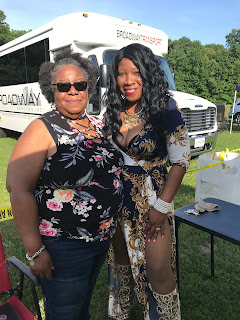