Shirleta Settles - Not Just A Voice

Shirleta Settles mostly sings R&B and blues and doesn’t sing a lot of southern soul…not yet, at least. But I think she’s going to convert and come over to the other side. 😊

Shirleta is a native DC resident and has been singing professionally for over 25 years.  She is kind of soft spoken but has a commanding personality; she's petite and powerful.  She has an air of confidence, a beautiful smile, and is naturally curious about the things happening around her.  I had the honor of talking to Shirleta at a southern soul music festival and we hit it off right away.  We both love all kinds of music.

When you listen to Shirleta sing, you’ll hear that her voice is beautiful and strong.  She adds life to her music and is extremely talented; this girl can really sing.

I asked her who influenced her singing and she said that some of the people she admired and impacted her life were Gladys Knight, Aretha Franklin, Etta James, and Mahalia Jackson.

Like me, Shirleta said that she loves to write and has been writing all her life.  Her father was a singer and she even used to write the lyrics for some of his songs.  As a writer, she enjoys writing poetry and words mean a lot to her - she enjoys hearing songs that have a meaning.  As you know, southern soul songs always tell a story, often of infidelity, but not always.  There are songs about everyday life and you’ve probably experienced some of the emotions that southern soul brings.  For instance, there are songs about being cheated on, being the other woman, and walking away when things are bad.  Then, there are songs about that wonderful man or woman who is your everything, songs about dancing and having a good time, that hole in the wall, and many other situations you’ve experienced.  Of course, there are also the songs about making love and sex but isn’t that real life???

Shirleta is a humble person and has a kind heart.  This is evident because she loves working with senior citizens and children in her community.  In fact, she is actively involved in her community and has a sincere passion for helping people.  She is a former vice president of her civic association and is also a former Advisory Neighborhood Commisioner (ANC) in the District of Columbia.  ANCs are representatives of their districts and are responsible for a wide range of policies and programs that affect their neighborhoods.  This can include traffic, parking, recreation, trash collection, police protection, and so much more.  That work takes a lot of commitment and dedication and Shirleta’s service is about making a difference in the lives of her neighbors and fellow residents.

Shirleta Settles is a singer but she is known more for being an entertainer and loves to involve the audience in her shows.  She has performed all over the world and, if you ever get a chance to see her perform, please go!  She isn’t singing much southern soul yet, but it’s coming!

For more information on this dynamic performer, please check out her website: http://shirletasettlessings.com. 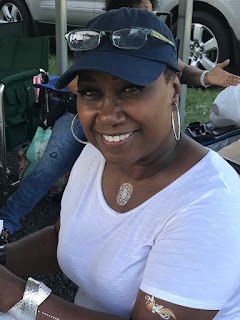