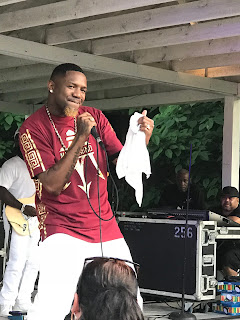 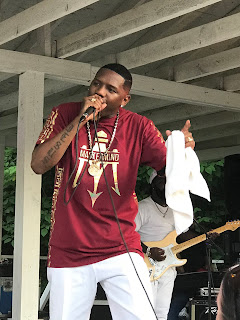 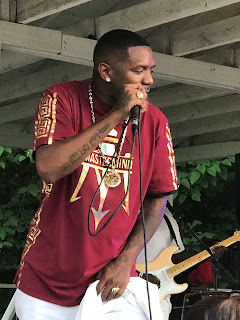 LJ Echols is a great artist and a wonderful guy who grew up in Bassfield, Mississippi, a small town about 20 miles from Hattiesburg.  He has a gospel background and sang in a gospel group with his parents and other family members.  He later turned to R&B and started singing solo southern soul around 2004.

I had a chance to talk to LJ so I could find out a little about him.  He writes, produces, and sings his own music and when I asked him who influenced him, he said that it was Sam Cooke.

LJ started his own record label called Neckbone Records and has a band with the same name, Neckbone. Neckbone performed with LJ in Pomonkey and they are excellent - a very talented band!

I asked LJ what he wanted people to know about him.  He said that he is humble and that he loves people.  I can attest to that because I found him to be friendly and a people-person. He was nice, considerate, willing to take pictures with everyone, and was extremely patient.  LJ also said that he wants people to know that he has a good attitude, may be a little country 😊, and that he loves the Lord.  Amen!!!!!

At the show, some of the songs that LJ sang are as follows:
Got To Tell Somebody
14-16
Mississippi Boy
Little Bluebird (awesome, awesome, awesome)
Peter Pumpkin Eater

I’m sure you know his huge hits, “From The Back” and “Good Motor,” but one of my favorites is “How Low Can You Go!!!!” I may not be able to play it around my kids but the beat, music, and his voice are just amazing!!  A drunk person speaks a sober mind...
I love LJ Echols!  He’s a good man and I love his music.  Go see him whenever and wherever you can!! 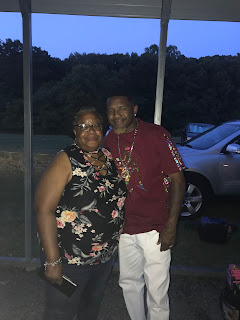